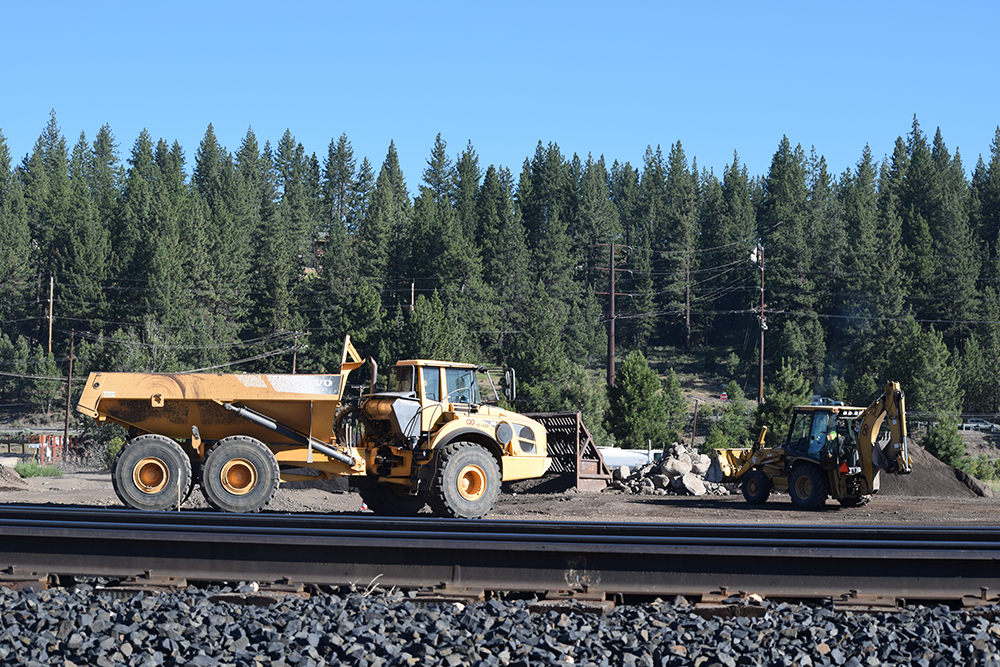 For 15 years the Truckee Railyard has had a project in the works — an infill development expanding Truckee’s historic downtown to the east. Ultimately, the planned buildings will play host to multiple residential options, retail stores, a movie theater, and eating establishments.

To get to there, Holliday Development, CFY Development Inc., and Egis Group Inc. are pushing forward the first approved project under the Railyard umbrella: Truckee Artist Lofts. The workforce housing development will undergo construction beginning in August, with hopes for completion by spring/summer 2021 at the latest.

Jason Hansford, Railyard project manager, thinks 12 months could be a more realistic time frame, as long as the weather plays nice. He explained that since the project received its go-ahead tax credits on June 12, the tentative timeline until the residences are up and running includes excavation and foundation work followed by stick frame construction and then the arrival of the modular units (more on the why and how of modular here).

“When the units show up, they’ll be stacked,” Hansford said. “That should only take a matter of weeks … Then it’s roofing and skinning and inner ties with all the individual units in the corridors.” 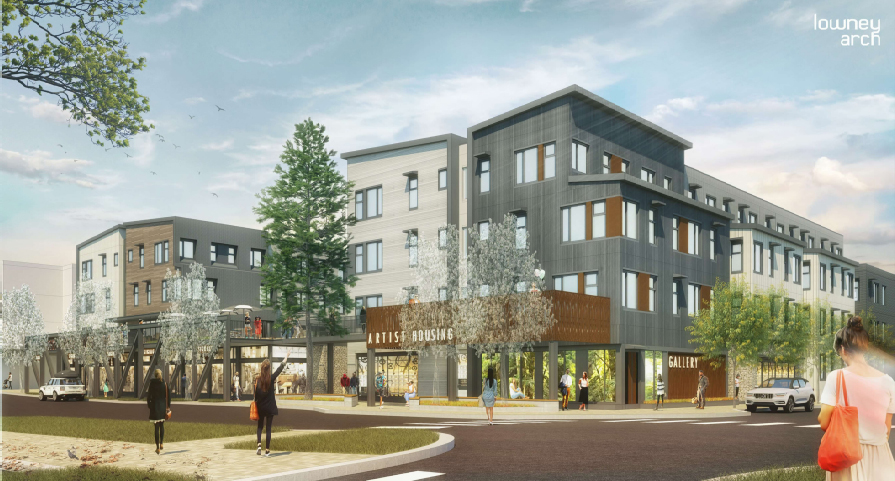 STACKABLES: Truckee Artist Lofts will be made up of modular units. The units will be constructed off-site at Factory OS in Vallejo, then shipped to Truckee. Once assembled, modular units are practically indistinguishable from units constructed on-site. Image courtesy Holliday Development

John Cicerone, president and owner of Egis Group Inc., a partner with CFY in the development and future property management of the project, sees only good things coming upon completion.

“It’s going to be a knockdown success,” he said. “It’s a 77-unit workforce housing project, family-oriented. Nineteen three-bedroom, 19 two-bedroom units — how can it not be a success when our rents are going to start at 400 bucks and probably at the most be somewhere with the bulk of the units in the $800 to $900 range?”

The 12- to 18-month completion estimation may seem long, but a tangible next step will take place for interested parties in the coming weeks, said Azzie Youssefi, current project manager for CFY.

Youssefi stepped into her role since the passing of her husband, Ali Youssefi, in early 2018. Ali Youssefi was the original mastermind behind the Artist Lofts concept.

“We are going to start taking an interest list through the website in the next few weeks,” Youssefi said, “because we know that people have been patiently waiting for this project, [and] have known about it. Once we break ground, we want to have a place for people to place their names in case they are interested in applying eventually.”

The interest list will initially request basic contact information, and will be available through the Railyard project website (as well as a separate to-be-announced site). Once the official application is ready for release, CFY will reach out to everyone on the list.

“[We’ll] let them know our applications are now open,” Youssefi said. “Let them know, if they’re still interested in applying, where they can do that, all the information they would need for the application, how the scoring works.”

The scoring will be the system for evaluating prospective tenants as the Lofts become a reality. Because the list will likely be longer than the available 77 units, CFY and Egis Group Inc. will initiate a lottery system when selecting tenants. The two groups are working with Town of Truckee staff to identify different preferences for residents — “we’ll try to reach out to find applicants who have a tie to [Truckee’s] community,” Cicerone said.

“We will do it based on an incentive system where people will score a certain number of points for certain characteristics of their application,” echoed Youssefi. “Dependent upon that, we’ll have a lottery system where dependent on the score people have will determine the next person in line for securing a unit.”

Though the characteristics are not yet defined (Youssefi said they’ll be made public in the near future), one attribute may help prospective tenants.

While those interested are not required to be artists to live in the Artist Lofts, Youssefi explained that artists will receive points on their application for being such. The goal of the housing in the first place is to encourage the creative class in Truckee, and CFY is confident that most people applying will be involved in some way with art.

“Artist doesn’t mean that’s their primary occupation,” Youssefi continued. “Most artists are in a regular work force, a labor force, and are doing their art as a side gig because they can’t afford to just do their art as their occupation. That’s the whole reason for providing affordable housing for artists, to allow them to utilize their time a little more on their creative interests.”

There is no specific definition yet for what may clarify an artist living in the housing, but Youssefi has been involved in a similar housing project in Sacramento, the Warehouse Artist Lofts. At WAL, the net for artists is cast wide — a variety that includes food artists, painters, sculptors, photographers, and filmographers.

“We’re not looking to disqualify people based on the type of art they’re doing, that’s for sure,” Youssefi said.

The lottery will take place a few months prior to the property’s opening. Regarding the random drawing to determine tenants, it’s important to Cicerone that those interested not panic.

“There’s no mad rush to get on our list, because as long as they get on the list all the way up to the date that we do this lottery, everybody has an equal chance,” he said. “I know that when we’ve opened projects before, we’ve had lines of people around the block and even people camping out overnight to hand in applications. That’s where this random draw came in, was to stop that madness.”

The developers worked side-by-side with the community in bringing the Truckee Railyard to fruition, though there have been some naysayers, said Nikki Riley, who’s kept a close eye on the railyard project since the early 2000s. 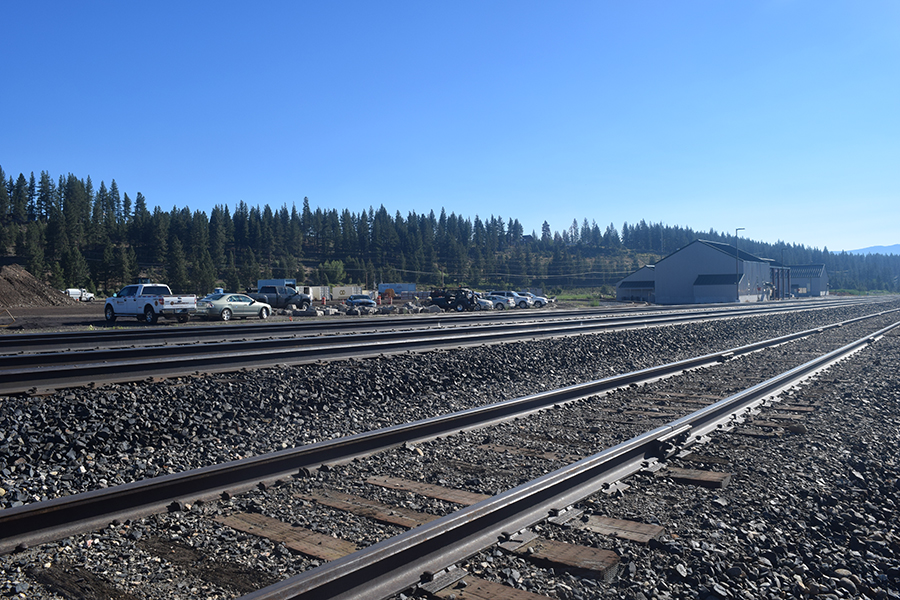 ON TRACK: A portion of the Truckee Railyard Project will be developed within Union Pacific Railroad’s balloon track, a looping railroad spur allowing railroad vehicles space to turn around without stopping. Photo by Alex Hoeft/Moonshine Ink

“There was some pushback for this artist focus, is it alienating and what not,” Riley said. “Talking to Ali [Youssefi] … he understood that transformation. He understood that giving artists a space to create and to thrive, it enhances the community and it’s really a benefit. There’s no interest in excluding anyone, providing a directed intent with the Artist Lofts is a way to set the tone and to design a space that’s going to have energy and vibrancy.”

Riley is hopeful that continued pushback will settle as the project progresses, particularly once August’s groundbreaking takes place.

Those heading the development think the community will really take to the housing, as well as the entire project.

“I’ve been in Truckee for a long time,” Hansford said. “I think it’s great to be able to have infill development on a brownfield site that was underutilized in the downtown core. In that regard, it’s a huge win and I think it’s an important element to have people not have to get in their cars every time they want to go do something.”